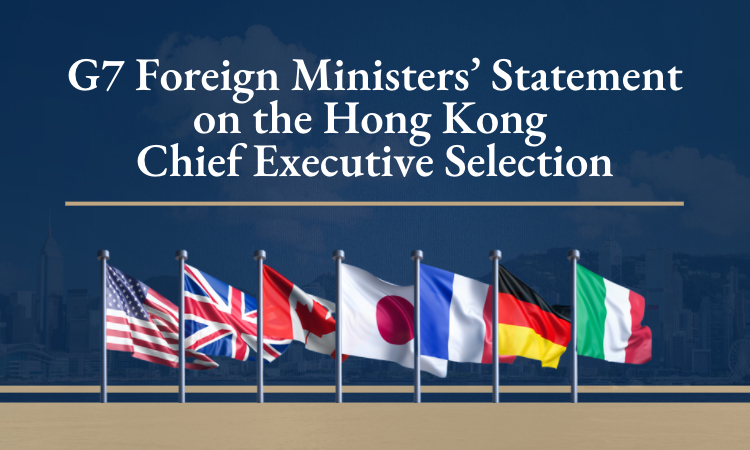 MEDIA NOTE
OFFICE OF THE SPOKESPERSON
MAY 9, 2022

The text of the following statement was released by the G7 foreign ministers of Canada, France, Germany, Italy, Japan, the United Kingdom, and the United States of America, and the High Representative of the European Union.

We, the G7 Foreign Ministers of Canada, France, Germany, Italy, Japan, the United Kingdom, and the United States of America, and the High Representative of the European Union, underscore our grave concern over the selection process for the Chief Executive in Hong Kong as part of a continued assault on political pluralism and fundamental freedoms.

Last year, PRC and Hong Kong authorities moved away from the ultimate aim of universal suffrage as set out in Hong Kong’s Basic Law by increasing the number of non-elected members appointed to the Election Committee and dramatically curtailing the number of voters eligible to participate in the Committee elections.

The current nomination process and resulting appointment are a stark departure from the aim of universal suffrage and further erode the ability of Hong Kongers to be legitimately represented. We are deeply concerned about this steady erosion of political and civil rights and Hong Kong’s autonomy. We continue to call on China to act in accordance with the Sino-British Joint Declaration and its other legal obligations. We urge the new Chief Executive to respect protected rights and freedoms in Hong Kong, as provided for in the Basic Law, and ensure the court system upholds the rule of law.